According to the agency website: Amidst the turmoil of a British military invasion in the fall of 1777, the elected representatives of rebellious New Yorkers met in Kingston to form a new state government. While convened in Kingston in September and October, New York's first Senate met in the simple stone house of merchant Abraham Van Gaasbeek.

In 1887, to recognize Senate House's role in the Revolution, New York State acquired the property, which quickly became a vital community museum. A two-story Museum Building was constructed in 1927 to house and display the site's burgeoning collection. Among its treasures are: major art works by John Vanderlyn and other members of the Vanderlyn family of Kingston, dating from the 1720s through the 1870s, and notable paintings by Ammi Phillips, Joseph Tubby, James Bard, and Thomas Sully. 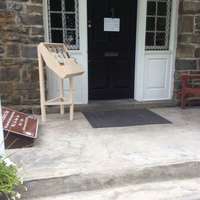